This is the life history of  Joe Yow (Chau Chung Yum) – an Australian Chinese migrant from southern China in the early 1900s.    Through his story, we can glimpse a life of a minority group in Australian in at turn of the century.    His story also reflects parts of Chinese culture and core values that are still shared amongst his descendants today. 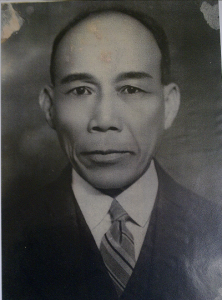 Joe Yow was born in a poor farming family in the Pearl river delta area in 1872’s.   He tried his fortune and settled in Australia, making numerous trips home village, with 2 wives he had 7 children, whose decedents are primarily based in Melbourne today.

Joe Yow lived through the end of Qing dynasty, Nationalist government (KMT), the turmoil of WWII and managed to prosper in Australia under the white Australia policy.

Joe Yow was not skilled nor formally educated, he had the intelligence and resourcefulness to build a tea export business in HK, a soy and sauce retail business in Macau, import and grocery business in Australia.

These businesses provided the bases for his family, through good and hard times, through wars and changes family fortunes.   His legacy is his children and grand children that shared a common value of tenacity and work ethics.    An ancestry house that he built in his village (QiaoTing village in Xinhu district, Guangdong province) still stands today – as a memorial, to his life and contribution to his clan.

Here is a time line summary of the major events related to Joe Yow and his direct decedents.