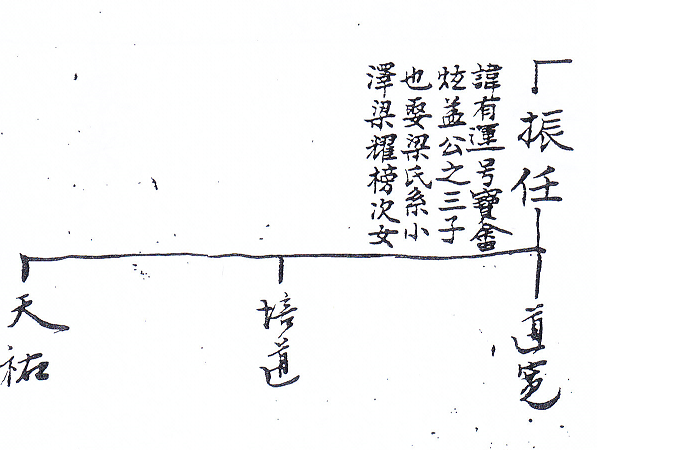 Excerpt of the Chau clan zupu , showing Joe Yow and his three sons from the first wife.

Shown above is the page in the Chau zupu documenting the Joe Yow.  This shows Joe Yow, his different names.  It stated his father’s name and that him being the third born.  It also states wife’s surname, the wife’s father name and that she was the second daughter in the family.  The three names shown as decedents are the three sons of Joe Yow with the first wife.  Joe Yow’s four children is not shown in the diagram.

Joe Yow has a formal name of Chau Chung Yum周振任.

A Chinese name typically consists of three characters. The first character is the surname or clan name.  The Name is middle and last character.  It is more common to find only 1 character as the name in the distant past.

For example with Chau Chung Yum,   周振任 is the full name consists of Surname and 2 characters birth name.

However there are other names given or used by a person in different circumstances.   Here is an explanation of his names:

A birth name is the name given by the parents.  This is used in most formal and family circle.  It is what is recorded in family tree (zupu) and head stones on graves.  For Joe Yow,  振任 Chung Yum is the formal name of Chau Chung Yum.

An adult name Is bestowed upon an individual following the Coming of Age Ceremony (成年禮) and the Capping Ceremony (加冠禮).  It can also be created when a man is getting married.   The Coming of Age ceremony is held at the age of 20.  This bestowing of adult formal name is, and is conducted by the parents to the son or a notable person.  When a person pass on, that adult formal name is referred to as the 諱(Wai).  It is marked on the zupu or the tombs stone as a wai, as a sign of respect.

An assumed name is a name that was created by the individual or may be given to him by others. There are various methods of developing a 號 Hao .    Some used a place of residence, some used the aspiration and desire in life as their assumed name.

A milk name is also be called Infant Name or Xiaoming  (小 名). These are names given to an infant akin to Western cultural referring to Pet Names.   It is common to see names of animals, specially domesticated or wide animals use as milk name.  It was reasoned that animals (eg dogs, chicken, pigs, insects etc) are abundant in nature, and that a child will grow up and survive into adulthood in the same way as natural animals would.   The Milk name is only used within the immediate family.  There is no record of the Milk name for Joe Yow.

So in fact the name of

More information on Chinese names can be found on  http://en.wikipedia.org/wiki/Chinese_name#Milk_name