You can find an Ancestry temple in most villages in China.

The village had a Chau family ancestral temple. This was about 50m on the left side of the house.   It was the focal point of ancestral worship, especially on major life events (birth, coming of age, marriages, burial) as well as festivals on the lunar calendars.  Ceremonies were conducted by the family elders of the clan.

This temple (祠堂) is a lineage shrine, where the Chau clan deified their ancestors and progenitors.  The temple usually carries the name of the oldest member of the ancestor, usually related to a person who developed that branch of the clan. The name of the template is written in a banner plague, hanging centre and high.  The Joe Yow’s ancestry temple plague has gold writing, on black background, that read

周 (Chau) 鼎新(Ding Sun) is direct lineage decent of Chau Shiu Lok  (周小六) – the original founder of that clan.         Chau Ding Sun is generation-6.  Essentially, he is the grand father for Joe Yow counting back 20 generations.   It is estimated that Chau Ding Sun lived around 1280 AD, during the end of Sung Dynasty (South Sung Dynasty).   This is the middle ages in European history – the time of the (last) Ninth Crusade , Marco Polo’s journey  to Asia and Kublia Khan challenging China and later established a new China kingdom– the Yun Dynasty.

However Joe Yow’s ancestry temple was destroyed during the cultural revolution in the 1950s. However, examples are these can still be found in Taiwan, Hong Kong, and China towns around South East Asia and Australia.  A typical example of an ancestry temple is show below. 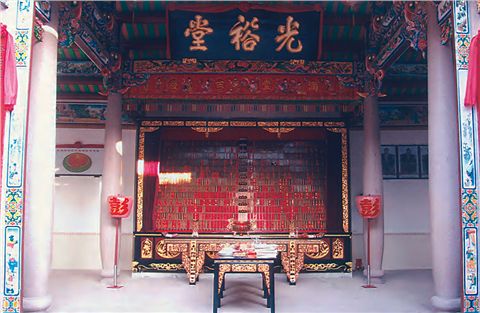 Every Ancestry temple has a main board/plague at the centre front, which bears the surname of the clan. Some will also state the name of the founding father of that village or that area.    Ceremonies are conducted by the family elder of the clan.

The Ancestry temple is the focal point of ancestral worship, especially on major life events (birth, coming of age, marriages, burial) as well as festivals on the lunar calendars.