The Chinese burial custom usually involves burning incense and paper-based offerings.   This is a way to assist the passage of the deceased onto the other world.  Incense and stick-candles are burned at the grave site, usually in sets of 3, placed directly in front of the grave mount.  Paper offerings (such as mock-money) are burnt in a large pot, a pit or a specially constructed funerary oven.

In the 1870s in Colony of Victoria, these customs could be very different from the European.  It would be a source of fascination.

It showed a grave visit scene, with clansmen at Chinese grave, with the backdrop of the Cemetery.

The picture described a ‘picnic setting’, where clansmen were burning paper offering.  A man on the right lighted candles/incense.

The graves are set in mounts, with a head stone at the back.  Offering of rice, meat  (probably pork/chicken) and wine can be seen in the foreground.

Note that the participants are all male, as this would be the demographics of the Chinese population in the colony at the time. This scene is likely taken at one of the grave visit festival (eg Ching Ming  or Chong Yang).   It is unlikely to be a funeral burial event. 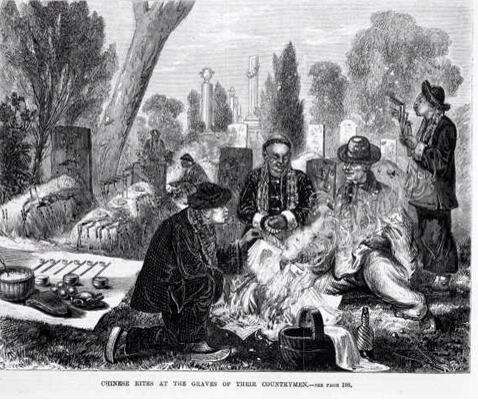 The burial rites must have attracted some attention, and there had been a number of news columns written about this.

As an example, the Sunday times wrote a fairly accurate description of grave visits in 15 Mar 1903.

“ Such is their fervent belief in an after-life, that they takes extraordinary precautions to ensure his departed countryman is avail of with the goods of this life to start with, in the next.

Before the grave mound the master of ceremonies arranges various offerings of meats, vegetables and feasts, incense, paper mache, and lights the candles (for the spirits being in the dark need light). The straw baskets, filled With tinfoil money, a paper trunk, packed with paper clothing and a paper Sedan chair for the deceased to ride in, are committed to the flames, and libations of wine are poured in to render the fluid invisible, and, consequently, available to the spirits. As the blaze of the burning mass ascends, the master of ceremonies kneels on a red cloth spread before his offerings, and bows his head nine times, precisely as the Chinese do in the temples before their deity.

His example is followed by all the members of the family present, not excepting even the younger, who are receiving their first lesson in ancestral worship. As the Chinese shave their heads, the neglect and desolation of sincere mourning is indicated by letting the hair grow. After the ceremonies at the graveside all the food (excepting a billy of boiled rice and a boiled fowl, which is left upon the grave) is carried away to be eaten by the mourners. “

The Chinese burial custom also generated fear and hatred in some quarters of the European population.

An article in The Australasian described the condition of the Chinese grave plot in May, 1883

“Some of them have a shabby wooden board at the top and a brick at the feet, with Chinese characters painted on them. The larrikin, who hated and persecuted the Chinaman while he was in the flesh, defiles and dishonours his grave now that he is dead, and the boards and bricks are in some instances lying scattered about, where they have been scornfully kicked. The Juden-hasse, of Eastern Europe is here Chinese hatred, and both are equally blind, ferocious, and unmerited.  “