There are 107 grave stone in the Chinese cemetery plot today.

The records from Melbourne General Cemetery trust dated these graves to 1860-1880.  This fits into the data range of other head stones in the surrounding denominations.   This is a period towards the end of the gold rush in Victoria.

The original idea for the Chinese sojourners was to find gold and return to their villages in China.

Those who died in the gold fields are mostly buried in Victoria.   In some exceptional cases, especially for those who have found their fortune, their remains would have been re-patriated to China.

As these sojourners are almost single male with no family, coupled with their circumstances, it is likely that their burial service would be simple.  The village society (同鄉會), which is a benevolent society formed by their clansmen from the same village, might have contributed in part to the cost.

Most head stones on Chinese graves tell some crucial information of the departed. This included

In more modern times, date of birth, name of spouse, sons or daughters may also be transcribed on the head stone.   Surname and home village is usually the bare minimum.

Essentially the departed want to be remembered by the family name and the village he/she came from.

The Chinese plot at Melbourne General Cemetery is unusual as the head stones only carry the name, written in English.  Furthermore, half of the names starts with the word ‘Ah’  (eg  Ah Foon,  Ah Tong,  Ah Wey).

Chinese names always start with Surname followed by the given names.  The given names commonly are two words, however some would have a single word given name.    The western name always carries the surname at the end.

It is very common to confuse the Chinese given name (second word of the given name) as surname.   There are a lot of examples of Australian Chinese decedents with a surname that was in fact the given name of the ancestor.

The word Ah, is not a name. It is merely a linkage word, preceding the name.  This is similar to the word “Mr” in the English language, without the gender connotation.

There are plenty of official records (migration, legal documentations, news reports etc) for the early Chinese, that start with the word Ah.

The grave stones in Melbourne General Cemetery, did not describe the surname and the village, and we also knew that the grave plot was reconstructed 1972.    The English wordings and common occurrence of the word ‘Ah’ on the head stone would suggest that, the head stones were reconstructed from the some form of archival records.  And that suggest that the original head stones (possibly made from timber) had been lost over the years, and therefore unable to complete the individual details.

In the absence of individual burial records, the State Record Office Victoria was able to provide some assistance.  Out of the 107 grave, about 50 can be matched to the burial public records.  It is possible to use this to make an extrapolation of the entire Chinese plot.

This gives some more details of the age and the year of burial.

The following chart shows the number of burials over time.   This record confirmed that the Chinese grave plot was used between 1870 to 1900.

The table below tabulates the age of the buried.  The common consensus is that the early Chinese in the gold fields were younger age, due to the hard labour involved in mining.  It is surprising to see that there is an older group of 50+ from the burial records.  Furthermore there were 2 infants buried on that site (1 month and 9 months old).

This would suggest that this group of Chinese were sojourners who have chosen to stay in the colony and/or started to build a community and raising a family. 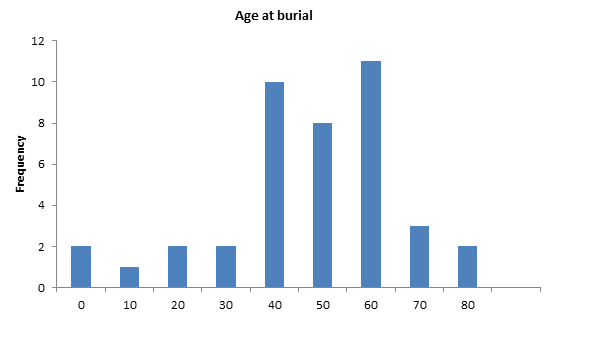