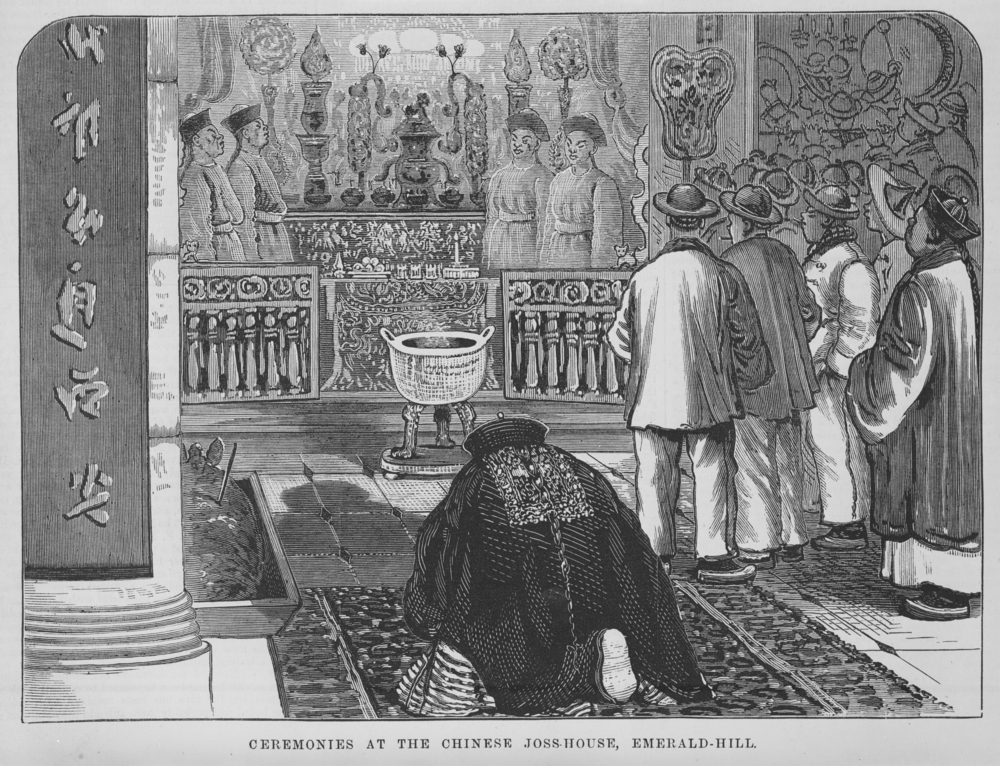 The central god in the temple is Kwan Ti ( 關帝 ).  In fact he was a real person, name Kwan Yu (關羽).  He was a patriot and warrior in the Three Kingdoms period (200-265 AD).  He exemplified masculinity and was famous for fidelity, righteousness and loyalty to his king.    His life story was written in a Chinese classic, Romance of the Three Kingdom  (三國演義).

He was chosen for the SeeYup temple probably on account of his physical prowess and loyalty to the kingdom/clan – all important characteristics for Chinese miners in a foreign land and a hostile environment.

In fact the concept of righteousness (正氣) is inscribed on the pair of poem decorating the entrance of the temple reflects this.

“  His righteousness is known to the entire universe.   His loyalty reaches to time immemorial.’

The layout of the temple is to replicate a count house or military court (衙門).

In ancient Chinese society, a count house was a direct extension of Emperor’s authority.  It was a place for inquisition, where justice was served, and where punishment was meted-out.  The court house was manned by solders and guards, and was completed with prisons and holding cells.     In general, the court house was a place to be feared, and to be avoided.

In the SeeYup temple, as it was in his court house, Kwan Ti is franked by two of his body guards,  Chang Fei 張飛 his colleague and his son Kwan Ping  關平.     His loyal horse is on his left, and his battle axe (關刀) is on his right.

Praying to Kwan Ti in his temple is said to enlist a powerful help on your side. It is believed that this will translate into protection and good fortune.