Way Lee was a righteous man.  He dedicated a big part of his life against injustices and discrimination.  He stood up to what he believed in. When he saw injustice, he took to the pen, argued his case passionately and intelligently, despite meeting strong criticism.

In particular, Way Lee had been campaigning against the way his countrymen were being treated by the colonial governments. He point to the fact that the discrimination is institutionalised by law (as a Poll tax).  He argued, the Chinese are generally treated well by the Australian people, the Poll tax (and the policy) was unjust and discriminatory.   He had a clear sense that laws govern society, and shape attitude of the people.

There were numerous examples of him fighting for the better treatment of Chinese, against discrimination.   He carried out his campaign in letters, lobbying and appeals to governments of different colonies.     In 1888, he appealed to the New South Wales and Victorian governments, on waiving the poll tax on Chinese entering their colonies.   In 1891 he presented a petition to the South Australian parliament to remove restrictions on Chinese immigration, and to allow free movement between South Australia and Victoria.

Way Lee took to the newspaper to argue his case, often in open letters and editorial pieces. He presented a valid argument and appeal to reason.

In 1900, he published an open letter in the Register, titled “The Chinese Question from a Chinaman’s point of view”.  He put forth examples of discrimination. Such as

“ Sons can not farewell his father in a funeral held in a different state.  “

“ A Chinaman who married a European wife, was refused re-entry to Melbourne, upon his returned from a visit to China.  This resulted in the forceful separation of a husband and wife.  This case was taken to the Privy Council of England.“

He collected examples of discrimination from every State, and highlighted this in-just and discriminatory policy is widespread.

He argued for removal of Poll tax, for freedom of movement for his countrymen.  His argument is often based on the equality, that the ‘Do to others as you would have them do to you ‘.

Here is an example :

“ …the unfortunate husband, not being at the moment able to raise the whole amount, had to allow his brother-in-law to remain two years in gaol. What barbarism! Place an English lady and gentleman who might chance to be travelling to China in the same position, and they would be treated in a very different manner.”

Way Lee had experience discrimination first hand.  Here is an account of his personal experience with the Poll tax.

In November 1888, Way Lee needed to visit Broken Hill.    He had a letter of introduction from South Australian Premier, Sir Thomas Playford, and colonial parliament members.  However, he was denied entry at the Albury station, and was charged £100 and fined £50 for trying to enter the colony illegally.

Way Lee knew Sir Henry Parkes, (Premier of the colony of NSW) was also traveling on the train. He made an appeal to him in person.     Parkes took Way Lee under his protection allowing him to enter the colony.

This matter became a parliamentary matter in NSW, and Parkes was questioned on the floor of the Assembly. Parkes argued that there is ground for exceptions under this circumstances, even though the Way lee had violated the Poll tax law. 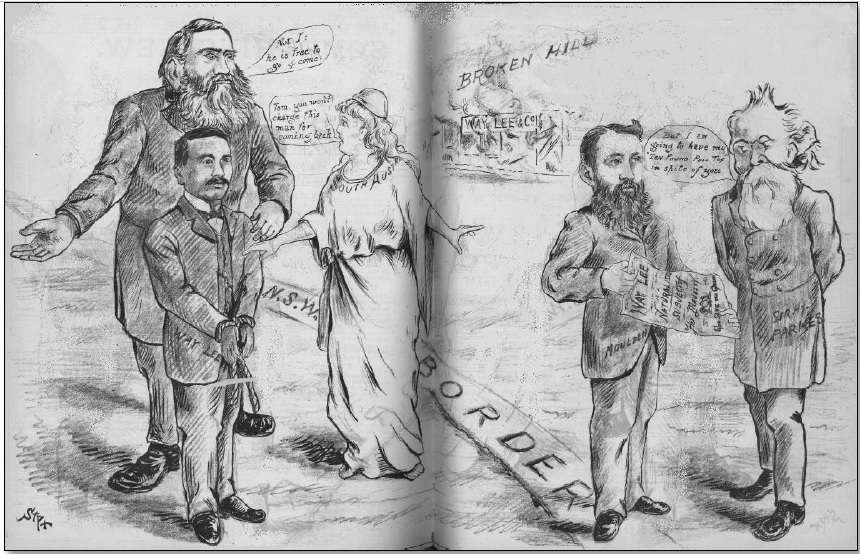 A cartoon satire depicting the incidence of Way Lee Poll tax in 1888.

The question of Chinese immigration was a contentious in the colonies at the time.  Anti-Chinese sentiments were gathering strength. This gradually evolved into laws restricting Chinese entry into the all the colonies.

With his outspoken view and political lobbying, Way Lee became a visible target for criticism.   Most of the criticisms are based on racial argument, as this satirical article in The Lantern shown. 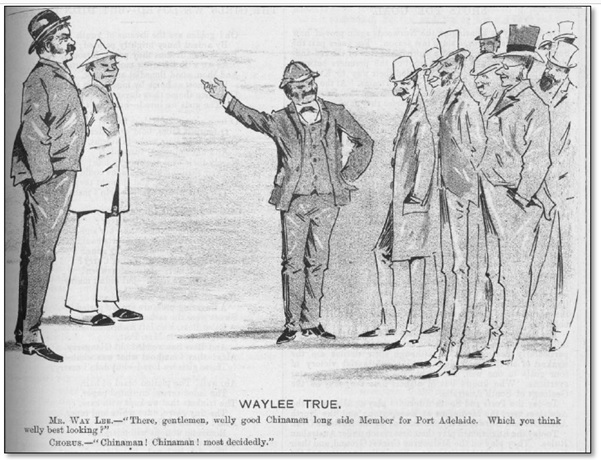 “  The Lantern was adamant Way Lee may be given “lee way” but a Chinese citizen in parliament was unacceptable –we do not want South Australia to be a paradise for celestials. The Moon would be more appropriate for the Chinese to colonise, anywhere but Australia. “

Previous: Vision for Australia
Next: Trade with China